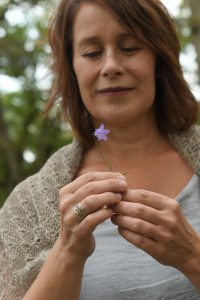 “The folk music of Swedish-speaking Finland, its untamed polskas, minuets and folk songs, have been my field of research during my entire life.”

Marianne Maans (born 1965) is a versatile folk musician working with different kinds of musical and educational projects. She performs solo and in different ensembles and gives workshops and courses for people of all ages. She sings and plays fiddle and octave violin.

The music of Marianne consists of traditional and contemporary folk music, children’s music, folk chorales and early church singing. She is also very fond of emotional tangos and old schlager music. She has arranged music for choirs, edited educational materials and acted as artistic director of music events. She has published approximately 20 recordings both as a soloist and with ensembles like Pirnales, Jouhiorkesteri, Folkrörelsen etc. Marianne was one of the prize winners of the Swedish Cultural Foundation in 2017.

Marianne was raised in Ähtävä in Ostrobothnia but has lived in many different parts of Finland. At the moment she lives in Turku in South Western Finland. She holds a Master’s degree in folk music from the Sibelius Academy and is also a trained community musician and mental trainer.